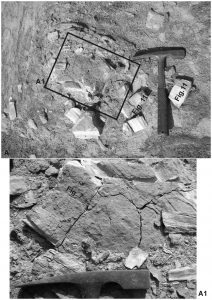 A new species of sessile barnacle Hexaminius venerai, described from the middle Eocene La Meseta Formation of Seymour Island, Antarctic Peninsula, is now the earliest known record of the genus in the Antarctic, its first occurrence from outside Australian waters, and the first record of a fossil cirripede attached to the substrate from the Antarctic. Exceptional preservation of more than 200 specimens revealed intriguing evolutionary aspects, suggesting that this species is a survivor of an early phase in balanid radiation, prior to the development of strong radially-interlocked parietes.