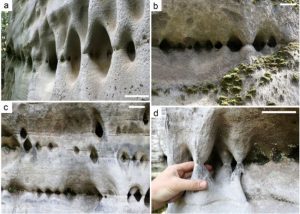 Critical evaluation of hundreds of photos of sandstone and other granular rock outcrops taken in various regions around the world revealed a presence of a specific sub-group of weathering forms related to planar discontinuities, hereby called arcades. The arcades are characterized as pits and cavities varying in size, but similar in shape, coalesced into „trains“ along the discontinuities, and separated from each other by hourglass-shaped pillars. In their origin and geometry, these forms differ from widely known cavernous weathering forms such as honeycombs and tafoni. Using numerical and physical in situ modelling, it has been shown that arcade shape and size are controlled by the redistribution of gravity-induced stress along planar discontinuities and the resulting stress shadow, which is characterized by material loss owing to various weathering and erosional mechanisms.