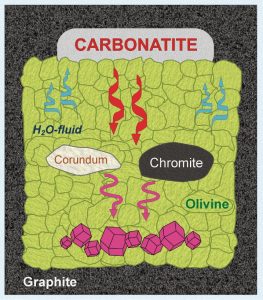 Newly performed experiments focused on formation of subcalcic Cr-rich garnet in the model ultramafic system corresponding to natural harzburgite with the presence of REE-bearing fluid phase. The experiments were carried out using a multi-anvil high-pressure apparatus at a pressure of 5 GPa and a temperature of 1300 °C. Natural serpentine, chromite, corundum and REE-carbonatite were used as starting components. Crystallization of garnet occurred in subsolidus conditions by the reaction of orthopyroxene and spinel in the presence of fluid phase. Composition of fluid was controlled by interaction of water released by decomposition of serpentine with carbonate. By using different amounts of carbonatite as a source of calcium and REE, subcalcic Cr-rich garnets were crystallized, which are typical for inclusions of harzburgitic paragenesis in natural diamonds. The experiments demonstrated that the REEs released from the initial carbonatite were transported by the fluid and were incorporated into the newly formed garnet. These results confirmed high partitioning of HREE into garnet. The present study indicates that the mantle carbonatites, which contain very high proportions of REE, can play an important role as source material in formation of REE-rich fluids to crystallize garnets with typical REE patterns in mantle peridotites.