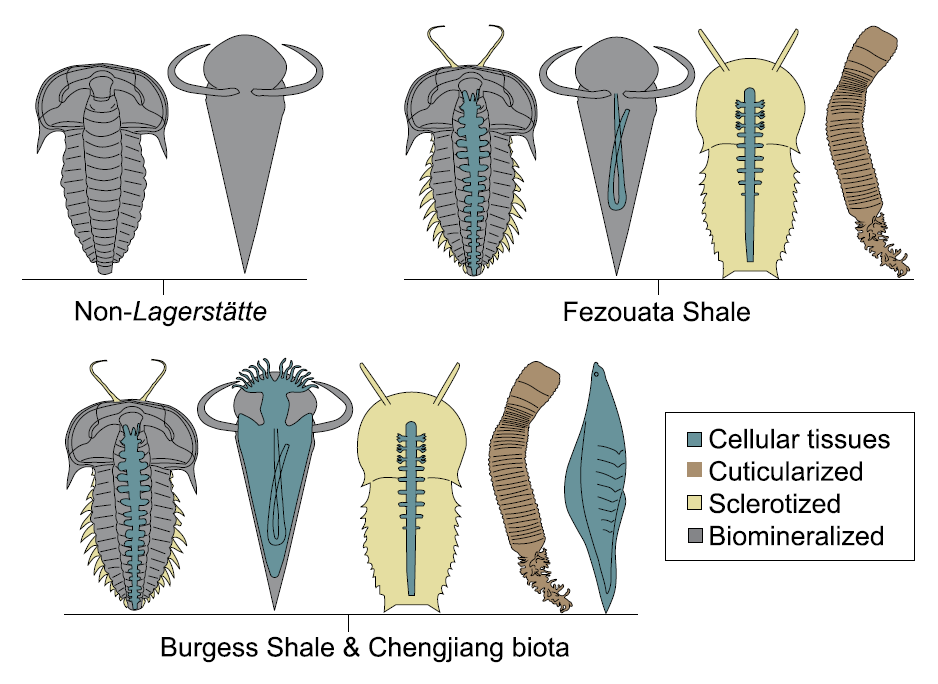 Exceptionally preserved fossils provide deep insight into early animal evolution. For example, the step by step evolution of morphological innovations that ultimately led to the origin of many recent animals was achieved using information from such exceptionally preserved fossils. Each of these sites with exceptional preservation – so-called Lagerstätten – is, however, a subject of specific fossilization bias. This means that at different fossil sites different information is lost during the fossilization process. To understand such information loss is especially important once we want to compare fossils from different sites and infer some general trends. Without knowing fossilization biases, we may end-up comparing apples and oranges. A new study by Saleh et al. (Lukáš Laibl as a co-author) tried to understand such biases. It compared three well known lower Paleozoic Lagerstätten – the Burgess Shale (ca. 505 million years old, Canada), the Chengjiang Biota (ca. 530 million years old, China) and the Fezouata Shale (ca. 479-478 million years old, Morocco). Interestingly, the Fezouata Shale is different from both Burgess and Changjiang. In Fezouata Shale, the soft parts of animals are most commonly associated with partially mineralized and sclerotized tissues. The digestive tract is, for example, preserved mostly in fossils with hard biomineralized exoskeletons (such as in trilobites and echinoderms). For the same reason, the entire soft animals are not preserved in Fezouata Shale. Indeed, most of the animals from Fezouata Shale were either biomineralized (trilobites, echinoderms, gastropods, brachiopods), sclerotized (many types of arthropods) or have had at least external cuticle (various “worms”). On the other hand, Burgess and Changjiang commonly preserve entirely soft animals and also show a higher diversity of different tissue types in particular fossil species. So to sum up, the answer to the question in the title is – yes, but with caution. We have to differentiate between fossilization absence and real absence. Many animals could have lived in the Fezouata Shale environment but were nor preserved because of the nature of the fossilization process. This is likely the case for early chordates that were entirely soft-bodied. On the other hand, the absence of penis worms (priapulids) in the Fezouata Shale is most probably a real aspect of the fauna, since these cuticle-bearing animals would “survive” the fossilization process.