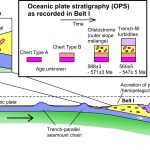 An intriguing example of a late Precambrian chert-graywacke mélange was explored by Jaroslava Hajná and colleagues in the central Bohemian Massif (mélanges are chaotic rock units that contain mixed exotic blocks and typically form along the active plate margins). A detailed field, geochronologic, and geochemical study revealed two types of chert (pelagic and those with a terrigenous component) that were mixed together during a large-scale submarine slide on an outer slope of oceanic trench. This case turned out as a quite unusual deep-marine succession and led to a definition of a new type of mélange. Published in a special issue of Gondwana Research devoted to the 100th anniversary of the inception of the mélange concept!